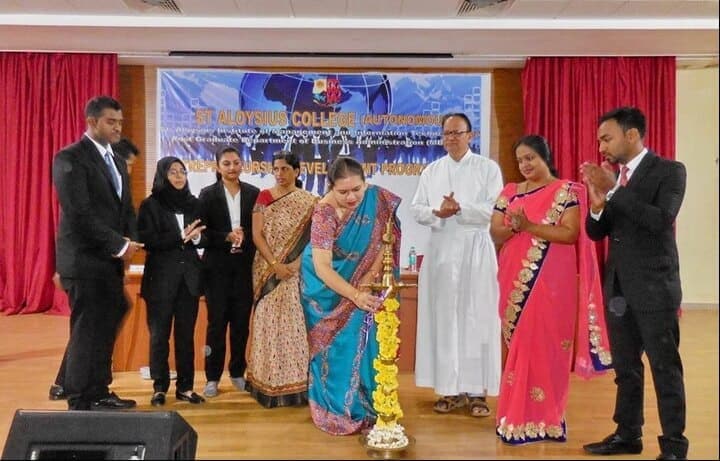 Mrs. Vathika Pai, President of Kanara Chamber of Commerce & Industry was the esteemed chief guest for the Inaugural of EDP-2018. Her insights on overcoming the hurdles faced by potential Entrepreneurs with practical ideas served as a good start for a productive day. The main focus was on how to be successful entrepreneurs, establish their own rules and succeed even if they fall a couple of times in this life long journey. She spoke about the ‘Centre for Entrepreneurship and Learning’ and it’s pros for a budding entrepreneur.

Fr. Denzil Lobo S.J, Director, AIMIT delivered the Presidential address emphasizing on the passion for carrying out a business. He portrayed the journey of a passion which turns into an obsession and an idea becoming a reality. He put forth an example of a bunch of entrepreneurial personalities who strove towards becoming successful and concluded with Elon Musk’s famous quote, “Work super hard”.

There were four sessions conducted and the first session was addressed by Annappa Pai, who is the director of ACE Foods Pvt. Ltd. He focused on his journey as an entrepreneur. His business of manufacturing started due to the non-availability of tasty potato chips in the city as compared to Mumbai. The idea of becoming an entrepreneur gained momentum while travelling to explore various possibilities to start a new business. He stressed on the importance of analyzing before acting. His suggestions to young entrepreneurs were to focus on the product, quality and customer rather than the money. He also said it would be useful to learn new languages to communicate to the suppliers, dealers, service providers and customers. Success doesn’t happen overnight is what he concluded his session with.

The second speaker for the day was CA Chandrakanth Rao who spoke on the formalities of starting a new business with utmost emphasis laid on financial management and allocation of monetary resources. He spoke on the importance of never giving up when one decides to start a new business. He spoke on the relevance of a good business plan/ framework prior to starting a business. Speaking about the financial aspect of business, he explained about the sources of funds, forms of funds which vary from business to business and also the mobilization of funds. He guided the budding entrepreneurs on what they need to focus on when it comes to the financial planning of a business. He threw some light on how the funds would appear in the Profit and Loss statement, how to present the project report while seeking funds from a bank. He also shared important information on the legal aspects and compliance factors while starting a business.

The third session in the afternoon was addressed by Mr. K Nikesh Shetty, an Advocate. He gave us a list of steps to be followed before starting a business. He spoke about the importance of the certificate of incorporation and the legal consequences that an entrepreneur will have to face if he/she fails to abide to the legal rules and regulations. He also gave us a set of legal Acts related to Labour legislation and concluded with a brief note on Intellectual Property Rights.

The last session was taken over by Mr.Rajendra Desai, an in-house Resource person who spoke about the relevance of marketing in connection with a budding entrepreneur.

He spoke about his experience as an entrepreneur in the past. The challenges and pros of self-employment. His main focus was on doing things in a better way. With good marketing, sales become irrelevant, and this was best explained by Mr.Desai taking the example of IPhone. It was a very interactive session. Student entrepreneurs from amongst the Aloysians were picked up, Mr. Prajwal Sequeira, Mr.Calwin D’Cunha, Mr.Sada Muneeb and Mr. Hameed Nadeem shared their entrepreneurial journey, as a Web-designer, an Event Manager, a Tissue manufacturer and an Interior designer respectively. Sometimes examples from amongst us will help us understand Entrepreneurial Development better.

On the whole the workshop paved a path to be more informative, interactive and gave students full-fledged insights to become successful entrepreneurs. 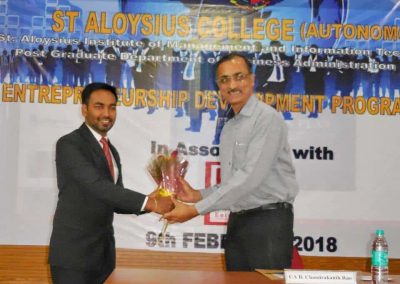 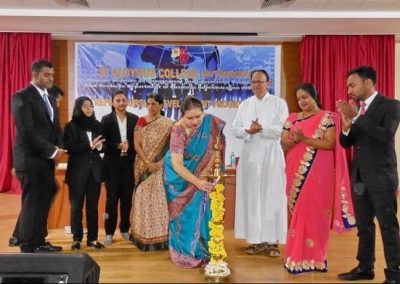 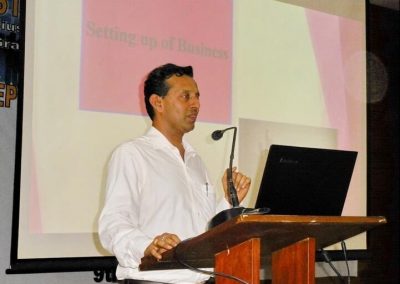