Students of AIMIT took part in the beach cleaning drive on Sunday, October 31. The drive was organised by Someshwara Town Panchayat. It was organised as part of the ‘Clean India’ campaign.

Students were happy to be part of the campaign. They were at the beach as early as 7 a.m. and helped the organisers in cleaning the Someshwara beach. They collected as many as five bags of garbage strewn all over the beach.

Some of them were disappointed that those who frequent the beach act irresponsibly. “It is important that we keep our beaches clean. I was sad to find so much garbage. It is done by educated people themselves who come to the beach often. I urge all civilians to act responsibly and make sure to keep not to spoil the beauty of the beaches by throwing plastic and garbage,” Harsh Subhash Thakkar, a student of II MBA, said. 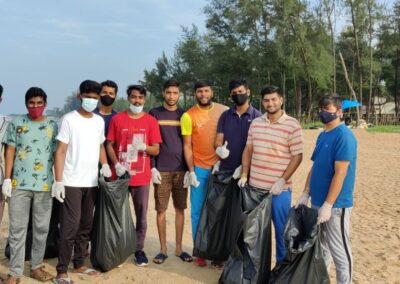